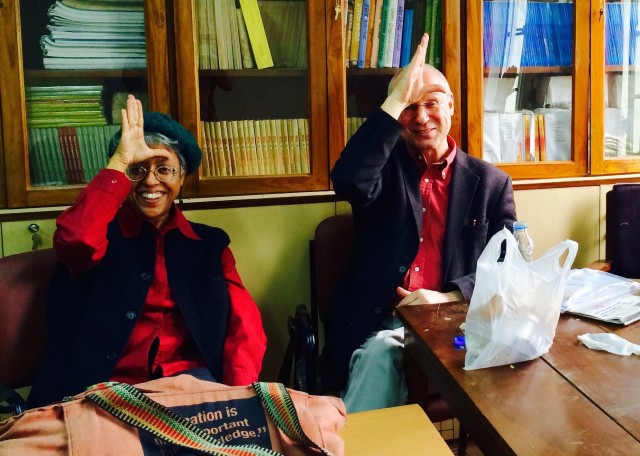 Things may have seemed quiet on Dubious Saints recently, but in fact losers have been failing to gather across the globe, under-achieving on a scale that scarcely disturbs the register. Here we see Sampurna and Bill at Jadavpur in February 2015,  making the Secret Sign That Must Never Be Revealed to camera, thus flunking the first rule of Losers’ Club. No, wait, that’s ‘No-one who wants to be a member of Losers’ Club can be a member of Losers’ Club’, isn’t it? Or is it?

Poet and pseudo-scholar W.N. Herbert was born in Dundee in 1961, educated there and at Oxford, where he completed his DPhil thesis on Scottish poet Hugh MacDiarmid, and now lives and works in Newcastle. He is Professor of Poetry and Creative Writing at Newcastle University, and his books are published by, among others, northern publisher Bloodaxe Books. He is also the Dundee Makar, or city laureate.
View all posts by Bill Herbert →
This entry was posted in Dubious and tagged Alexandra Buchler, Bill Herbert, Jadavpur University, Kolkata, Sampurna Chattarji. Bookmark the permalink.